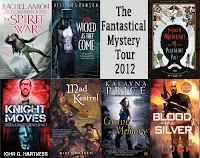 To prepare for the release of GRAVE MEMORY and the upcoming Second Annual Fantastical Mystery Tour, I thought I'd start a series to spotlight the Authors who will be participating in the tour. And of course, I'll give away books during each spotlight. Sound good?

Today I'd like to start the series with a spotlight on James R Tuck, the author of the Deacon Chalk: Occult Bounty Hunter series. I first met James last year at DragonCon before his first book, BLOOD AND BULLETS was released. But Dragon is huge and we didn't have much time to talk. I ran into him again at ConCarolinas, and I have to say, this is one guy you want to hang out with. He is smart and witty and all around fun, so don't let the fact he looks like a scary bouncer intimidate you--he is totally approachable. He is also one of the people who talked me into my last minute decision to join Fandomfest, so if you'll be at the con, make sure you go chat him up.

Okay, enough of my blathering and let's move on to the blurb for James's debut novel, Blood and Bullets: 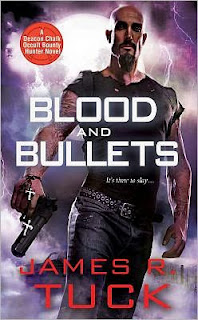 He lives to kill monsters. He keeps his city safe. And his silver hollow-points and back-from-the-dead abilities help him take out any kind of supernatural threat. But now an immortal evil has this bad-ass bounty hunter dead in its sights. . .


Ever since a monster murdered his family, Deacon Chalk hunts any creature that preys on the innocent. So when a pretty vampire girl "hires" him to eliminate a fellow slayer, Deacon goes to warn him--and barely escapes a vampire ambush. Now he's got a way-inexperienced newbie hunter to protect and everything from bloodsuckers to cursed immortals on his trail. There's also a malevolent force controlling the living and the undead, hellbent on turning Deacon's greatest loss into the one weapon that could destroy him. . .

Sound good? I think so! It's definitely on my kindle set to be my next read. (By the way, Blood and Bullets is only 2.99 on kindle right now.) James also has a 'prequel' to the series called THAT THING AT THE ZOO available in ebook, and the sequel, BLOOD AND SILVER that will be out August 7th. 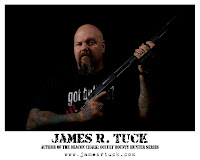 And a little more about James:

James R. Tuck is the author of the Deacon Chalk series from Kensington. He is a former bouncer and a professional tattoo artist in the Atlanta area. He lives just north of there with his lovely wife, two lovely children, and four dogs of varying degrees of lovliness. He writes dark urban fantasy that makes the nerve under your eye twitch.
www.jamesrtuck.com

Now on to the giveaway I promised. I'm giving away one copy of Blood and Bullets to a randomly drawn commentor. Simply leave a comment on the Blogger blog (click the link if you are reading this somewhere else) telling me about the last book you read that you'd recommend. I'll draw a winner on Monday to be announced during the online release party of Grave Memory on Tuesday, July 3rd. (Contest open internationally)
Contests and Giveaways Fantastical Mystery Tour

molly.frenzel said…
The last book I read that I would recommend is Born to Darkness by Suzanne Brockman. I could not put it down!

Anonymous said…
I recently finished Magic on the Line by Devon Monk, which is the seventh in her Allie Beckstrom series. A pacy urban fantasy series -Love these books. They always make me want to drink coffee...

Redkatr said…
I just discovered your first book. I am loving it! You have a new fan and I am passing this book on to a fellow bibliophile.
June 26, 2012 at 6:58 PM

James R. Tuck Dark Urban Fantasy Author said…
I don't think I have told you how much I think you kick ass!

Unknown said…
The last book I read that I would recommend to someone was one of the many Gear Peoples of America books, The People of The Longhouse. I love their way with merging past facts with events that bring the information to life!
June 27, 2012 at 12:42 PM

Melliane said…
I heard a lot of great things about this book, it sounds amazing! I think I would say Full Blooded by Amanda Carlson, I was so surprised by the novel and it's a great start for an UF series. I can't wait to learn more about it.

Maria said…
I love reading book recommendations! I've added this book to my GR shelves since it sounds very interesting. Actually I found the Alex Craft books through a recommendation, website one. "If you like this book you may like this one" type of recommentaion. :)

A book I recently read that I would so recommend is Nevermore by Kelly Creagh. Its a YA book but I loved it! It had great characters, awesome scenes (some that drew some emotionalness from me), interesting creatures and settings... And I really thought she used Poe's story and his works well. I even enjoyed the scenes dealing with Masque of the Red Death, which I've read what feels like a billion times & isn't my top Poe story. Anyway, I already preordered the second book (even though its Hard cover & I don't care for them, but wait another year for it - no thank you) because I loved it so much, so I definitely would recommend this book.
June 30, 2012 at 11:21 PM